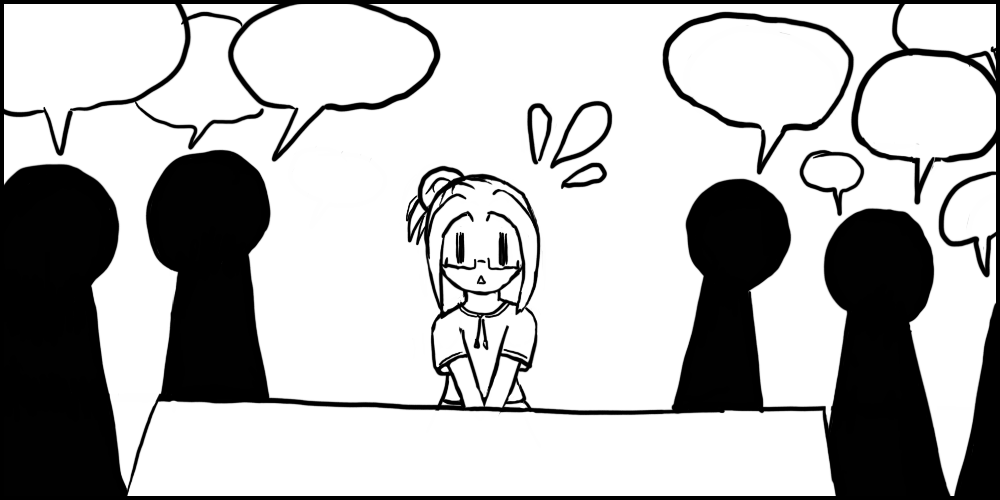 I'd like to make the world a better, kinder place, but I fail to find the words when they're most needed. Actually, here's a secret about me...

I'm a bit of a disaster when it comes to social situations. Like, such a disaster that I rarely get my mouth open at all unless it's in a group of people I know well, and even then only if it's a really small group of them. Otherwise, this is basically what always happens:

On top of that, I don't actually like standing out too much, and I find arguments and such really stressful and draining too. So, now imagine me trying to win a debate against any reasonably well-spoken person. It's just not going to happen. There's no way I could change the world that way.

Even though I fail hard at verbal situations, I fare a bit better in textual media. I get things said at least, given a bit of time to put my thoughts into words. However, my wimpy side still shows there too, making me feel bad about being loud or shamelessly promoting myself or the things I do. And my aversion to arguments stands strong on that medium too.

So, in the end, I'm pretty bad at social media too since I dislike being controversial or riling up people. And to make matters more difficult, I'm afraid of posting a whole lot of personal information online either. So, my social media self probably looks kind of empty and uninteresting too because of all this.

But I don't really mind being the kind of person I am. Sure, it's a bit a of hindrance sometimes, but everyone has their strengths and weaknesses. Even though I might be introverted and socially awkward to boot, I'm still pretty confident that I'm a rather nice person overall.

Back to changing the world

Anyway, I still wish that I could somehow make the world a kind, equal place that everyone could enjoy the way they are. Of course, in reality there's no way I could change the grand scheme of things, but I hope that I could at least make a couple of people in need a bit happier. Could I do that with games since nothing else seems to quite work for me?

This is the primary reason why I make queer games. Of course, I also wish that I could one day do selfish things like covering my basic living costs and perhaps even adopting a homeless cat. But even if those don't currently look like something that I could achieve anytime soon, I wish that I could at least continue making queer games somehow. Telling that kind of stories is so important to me.