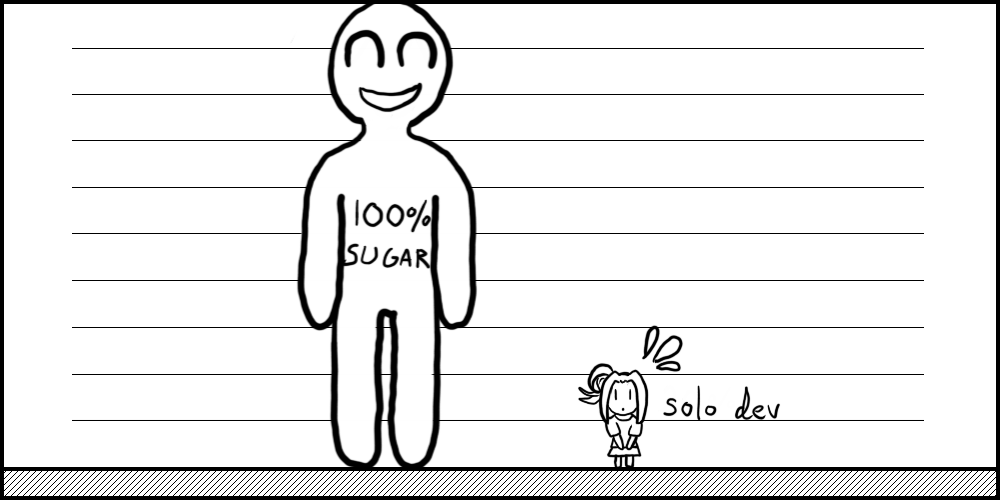 Being a solo game developer has its ups, but why did I really become one? Being solo is pretty rare, after all. Most indies at least subcontract some of the work because doing everything yourself is really hard. And doing everything well is even harder.

There are a couple of examples of successful solo developers. My absolute favorite is ConcernedApe, the developer of Stardew Valley. Awesome gameplay, awesome graphics, awesome music, all by one person. Hours of endless work leading to great financial success. And he seems to be a nice person too. What's there to not admire?

But it's one in a million success story. The reality is that only 7% of developers make enough money to survive. For every success story, there is over 10 failures that you never heard of, and... Huh? What about the ups of being the solo developer? I did promise? Uh, well, let's leave the doom and gloom for later then...

"So, if you love challenge and learning new things, you might be able to enjoy being solo."

The ups of being solo

Being a solo developer can be, in its own way, really interesting and rewarding. Because you do everything yourself, there's a ton of different things to learn and master. Graphics, music, sound engineering, coding, testing, writing, design, website hosting, marketing, social media, accounting... You name it! So, if you love challenge and learning new things, you might be able to enjoy being solo.

If you're successful enough to go full-time, you also have a lot of freedom to schedule your days. For example, if you're bad at waking up in the morning like me, nothing apart from your social needs and relationships will stop you from working at nights. Of course, the flip side is that you'll still need to work a ton, so great freedom comes with great responsibility.

But, in the end, the biggest up of them all is that you're more likely to survive financially as a solo developer because your games need to sell fewer copies. You can also pay a ridiculously low salary without the cops minding at all since you're the victim yourself. Oh, wait, shouldn't this actually be filed under the downs?

"In a way, being alone equals productivity, so you need to be careful about not letting your job pull you even further into solitude."

The downs of being solo

Being a solo developer can be really lonely. Like, lonely enough for even a hopeless introvert like me to feel it from time to time. If your social life wasn't strong to begin with or if it got heavily hit by relationship problems, you might even end up being completely alone the vast majority of your time. In a way, being alone equals productivity, so you need to be careful about not letting your job pull you even further into solitude.

Another interesting complication that I have noticed is that if you're already struggling to make your own ends meet, it's super hard to let anyone help you to begin with. Like, you can't afford to pay them the fair price that they'd deserve, and you don't want anyone to work for free or unfairly low price either. That fate sounds really familiar, after all, so you'll either end up refusing the help or struggling with the feeling that you're taking advantage of people's goodwill.

Being a solo developer can be stressful too. Basically, being responsible for everything while also and being the single point of failure means that there's a lot of pressure to keep working all the time. If anything bad ever happens to you, development will immediately grind to halt and all the schedules and deadlines you had set will fall apart. Because of all this, you need to be careful about not promising too much, but you'd still also need to build up hype somehow regardless. And you need to take good care of your mental health too!

"Simply put, I don't think that it would be financially feasible to do what I do without being solo."

Why did I go solo?

First and foremost, I became an indie game developer because I love making games and because I think that telling queer stories is really, really important. I feel that it's the best way for me to spread the messages of love and kindness.

Simply put, I don't think that it would be financially feasible to do what I do without being solo.

The math of being solo and not

Let's assume that developing a game takes 2.5 years and it costs me 600 €/month to barely stay alive. If I get 9 €/copy sold, the game would have to sell 2000 copies for the business model to be sort of feasible. In euros, the cost structure would be this:

Let's be super optimistic and assume that I could somehow cut development time to just 1 year if I hired one full-time developer. How many copies would the game have to sell to break even?

The answer is 4550 copies, which would be about 41000 net income in euros. The cost structure of employing one minimum wage developer here in Finland in addition to myself would be the following:

Back to the doom and gloom then?

No, not necessarily. The average game on Steam is said to sell around 2000 copies. Coincidentally, Rose Seed Replica would have to sell 2000 copies to break even. So, theoretically the situation isn't completely hopeless.

"But the first game is always the hardest, and the struggle is the same for all indie developers starting from scratch.."

Wait, you're 1/5 of a minimum wage employee?

Yep, and even then my first game will most likely still be wildly unprofitable. Like, at the time of writing this, I'm expecting it to sell maybe 150 copies out of those 2000 needed. But the first game is always the hardest, and the struggle is the same for all indie developers starting from scratch. So, in a way, it'd be kind of unfair, almost too easy, if Rose Seed Replica broke even already.

Besides, I don't care too much about money to begin with. Like, it'd be nice to have a bit more of it so that I could eat healthier food and adopt a homeless cat, but beyond that I don't need much. If I somehow hit the gold vein, I'd just hire a bunch queer game developers to distribute the wealth to the community and donate the excess to LGBTQ organizations.