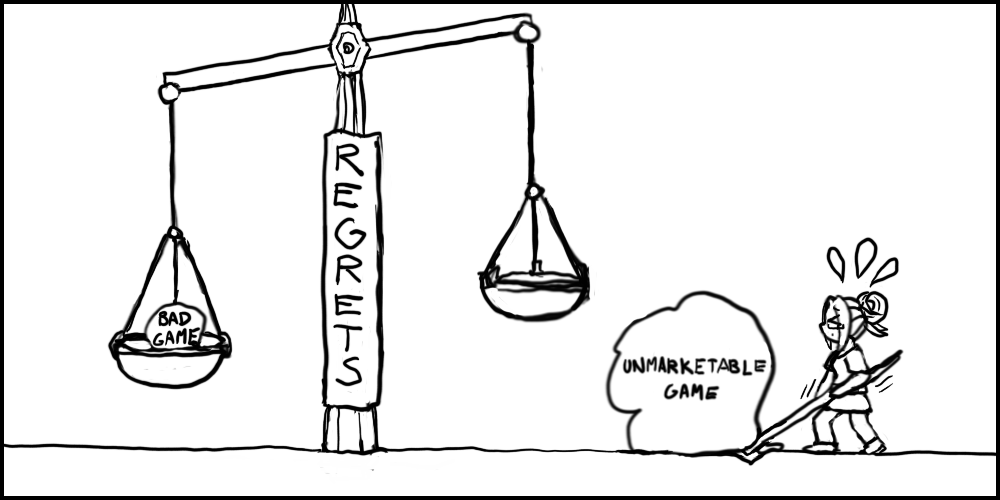 Dismantling your own games can be useful if you want to learn to make better ones, I think, so here goes. What do I regret about Rose Seed Replica? What would I do differently and what would I keep the same?

I guess that my biggest regret is making the game neither graphically astonishing nor action-packed and flashy, thus missing out two big, easy ways to showcase it. Sure, there are lots of funny and a few touching moments in the game, but capturing them into a single screenshot or a few seconds of video tends to be really hard.

In general, graphics are an easy way to convince people the quality of your game. Like, what's better than just taking a sceenshot and people going like this is so pretty? Rose Seed Replica does actually have a ton of graphics: there are over 1600 sprite frames in the game! Even if you exclude facial expressions and other "small" things, there are still about 650 frames. It took me hours and hours to draw them all, despite cutting corners in a few places even, so no way I could have gone for prettier graphics without going for a very different kind of game.

So, what to expect from my future games? 3D. I have actually been toying with it for game jams already and, honestly, it's just way less effort than Rose Seed Replica was. Like, you only need to model the character once and can animate it by rotating its limbs instead of having to redraw it 150 times. And if you decide to improve the base model, you don't need to redo the animations. It's almost outrageously easy in comparison!

Writing the kind of love interests that you like yourself, what a twist! But, really, what's there to not like? Funny, tender, considerate, kind of shy, kind of aloof, mysterious, pretty, with a couple of flaws thrown into the mix. Simply perfect wife material if you ask me.

It's again something that probably isn't ideal from the point of view of marketability, and it probably won't make sense to anyone who hasn't played through the game a couple of times, but I still kind of like it. Like, even if it's the trope of naming the thing after something that is only mentioned once in some obscure point of the whole huge thing, I still kind of like it.

What is there to learn about this? No idea. Perhaps the name doesn't really even matter that much as long as it's interesting and easy enough to remember and recognize? Perhaps I'll have to just keep naming my games according to what sounds good to me.

Making the mere existence of one of the characters too spoilery is another big regret I have. Like, so spoilery that maybe one third of the game is near impossible to screenshot and showcase, and graphics were already making that hard. Also, not being able to share progress made the second half of the game pretty lonely to develop.

From the point of view of the story, I don't really regret the plot twists and such in the game. I'm actually pretty pleased with the key characters having their own secrets and inner struggles, as well as character development stemming from them. The writer me and the gamer me approve of such plot twists, but the marketing me definitely regrets them.

Future games? Well, there'll still be plot twists and the characters will still have their own secrets and inner struggles. They're nice things to have, after all. But I'll pay more attention to their scope so that they don't start casting shadows all over the rest of the game and stuff.

Perhaps Rose Seed Replica isn't the hardest kind of science fiction out there. Perhaps leading more or less ordinary life in some random space station peculiarly reminiscent of Earth hardly even counts as science fiction at all. But, nevertheless, I'm still pretty pleased with that little science that the game discusses.

Like, I think that the scientific framework of the game is actually pretty solid. The fundamental concepts related to the main plot point have actually been proposed for real, and the game conforms pretty strictly to the Standard Model of physics too. Like, no faster than light travel, creating energy out of nowhere or stuff like that. Just the usual stuff with this one preposterous bit that the game tries to explain.

Of course, actual scientists would still snort at the game, but that's business as usual in science fiction, I guess. Nevertheless, I think that the game does alright job at explaining why things might be possible and what'd follow if they were. So, in the end, I'm pleased enough with the way how the game manages to be consistent and make sense within its own scientific framework and theory of physics.

Well, this is again a really spoiler heavy area, but I'll try to keep it generic enough to not ruin the game too much for anyone of you. So, well, the game is basically very self-referential in a very specific way. Like, in the sense that if you manage to solve the big mystery and think about the question that the game poses and what kind of protagnost Sophie actually is, you might be able to notice something strange about it.

Whether all this will make you scratch your head in confusion or think that it's actually pretty neat, well, I honestly have no idea. I hope that it's the latter because I think that this kind of experimental and risky things are definitely something that indie games should. Otherwise no one would do them. But, at the same time, doing super risky things scares me, so I'm a bit torn about this one.

Future games? I honestly have no clue. Perhaps I won't immediately go as experimental, but I'd still like to come up with something that somehow ties the story and gameplay together. After all, I'm still pleased with what Rose Seed Replica tried to achieve at least.

I wanted tons of fun little things to do. You know, minigames and things to enjoy in between the events. Well, there are a few things, but it's nowhere near what I wanted as I had to axe most of the plans due to it already taking forever to get the game finished. And, honestly, I really struggled to come up with anything that would both fit the setting of the game and be fun to play too.

I don't know, perhaps I'm just too harsh to myself since the beta testers never mentioned it despite my attempts to encourage them to openly talk about things they didn't like about the game. But, still, it feels a bit bad that the main game loop is so walking and talking heavy. Perhaps it doesn't feel awful to the player, but I still feel bad about it.

Or perhaps I'm just feeling so bad about it because I wanted to code more? Like, I certainly did miss coding and being more innovative with game mechanics due to all that endless content creation that Rose Seed Replica involved. Oh, well, perhaps I'll just have to put that coding energy into my next game.

Honestly, I really wanted to axe the asexual options since it was a ton of work to write and test them for every single route, but I didn't. Even though I'm not exactly asexual myself, I can kind of relate enough to see the value of these choices, so I absolutely wanted to get them finished. Even if just a handful of players will enjoy them, I think that they're still worth the effort.

The rest of the things are relatively minor in the sense of how much effort they actually took, but sometimes the little things are those that matter the most. Especially in the day and age when some people still fail at them. But, nevertheless, the game does all the little things I could think of and also briefly discusses a lot of random LGBTQ issues from Earth, so I'm pretty pleased with it overall.

Of course, I still kind of wish that I could do more, especially in the field of trans representation, but I'm honestly just way too scared of going for it since, based on what I understand so far, it's a really nuanced topic that's difficult to get right. I feel that I don't have the knowhow to get it right, so I probably won't be able to offer much here for now. So, go buy games from trans game developers instead, or perhaps even in addition if you feel generous!

The structure of the game offers decent replay value since the early game routes differ strongly from each other and the events in the latter half of the game also have multiple resolutions. However, it might feel kind of random at times, at least to those who aren't used to slice-of-life stories. It remains to be seen whether people mind one way or the other, but I hope that people will enjoy it because all the ridiculously complex branching was a huge pain to pull off.

I guess that the way the stories of the different characters are interleaved kind of works, but it doesn't feel like a genius story-telling approach exactly. If it weren't for the ridiculous branching and complexity arising from it, I could have probably come up woth something better, more cohesive, but oh, well.

As for future games, expect less branching or at least expect the scope of the branches to be smaller. I doubt my nerves could handle another game with chapter long branches merging and diverging all the time, but at least pulling it off feels like I achieved something grand and unique in some level.